WELCOME TO THE HOME PAGE OF
FRANK MUNDUS

I was the pioneer of sport fishing for sharks

books I can prove that the character "Quint" (played by Robert Shaw) in the movie Jaws was modeled after my shark fishing career and colorful, crazy exploits. Click on my photo to hear what's new. (WAV 592K; length: 27 sec). 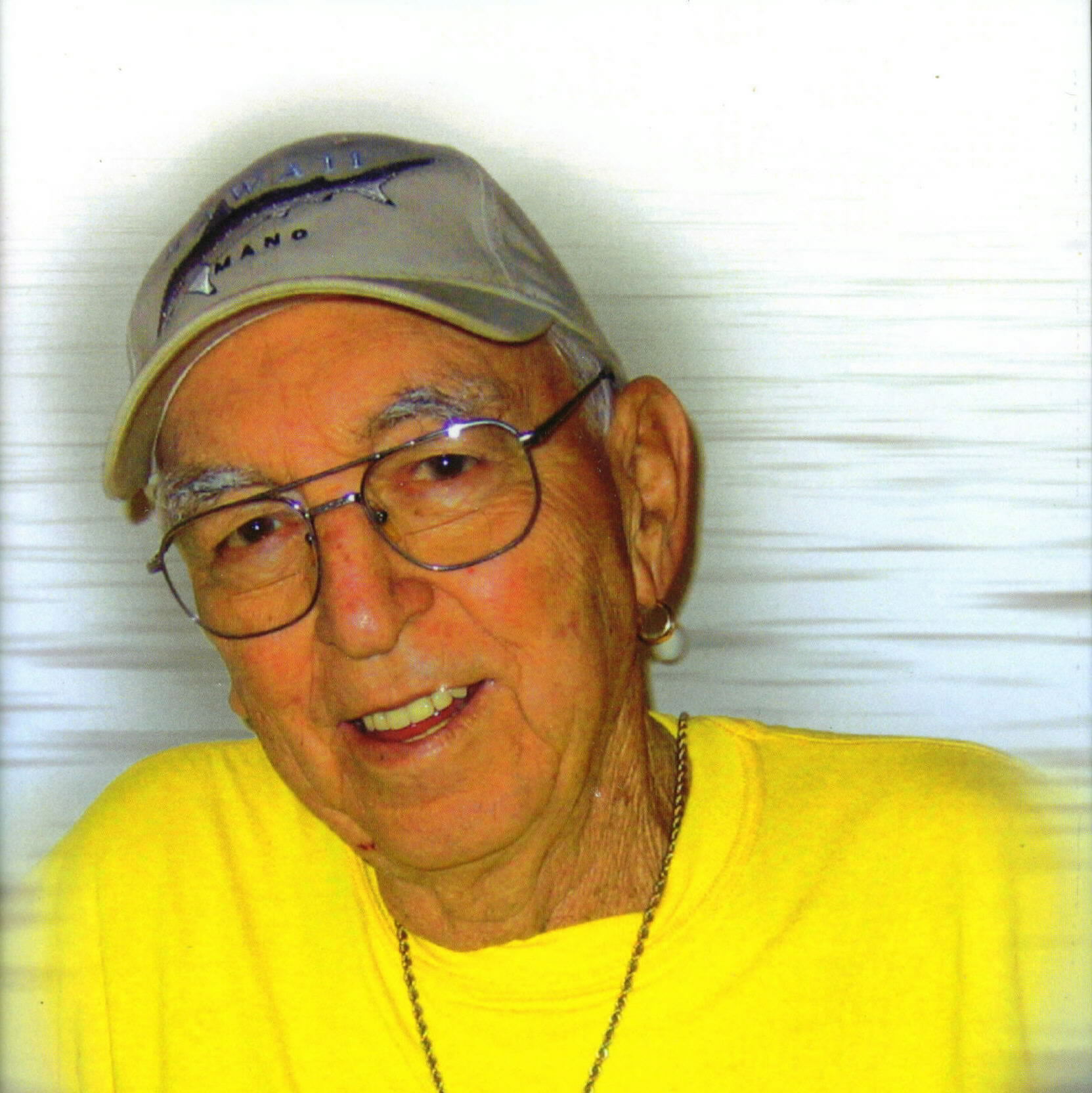 Frank Mundus 1925-2008 Note from Jenny Mundus to Frank's fans and visitors to this website: I am sad to report that Frank passed away on September 10th, 2008. I will honor Frank's memory by keeping his website running, because that is what he would have wanted me to do so that people can still drop by, read about him and listen to his audio archives. Wherever he is right now, he would want to continue aggravating his customers and fans, and so unsigned books copies of Frank's books and t-shirts will be available for purchase here online. 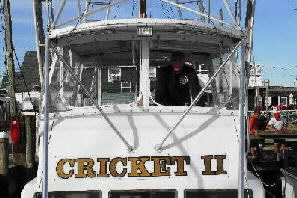 NEWSFLASH: The Cricket II Auction:
Frank had planned to auction his boat the Cricket II this winter after returning from New York, and he was confident that she would find a good home using this method. So I am following through with his plans. The Cricket II will be auctioned online by David R. Maltz of Maltz Auctions. Here is the link for the auction: Cricket II auction
Bidders can register online with Maltz Auctions from December 15th, 2008. The auction will begin on January 14th, 2009 and will run until February 4th.

NEWSFLASH: October 8, 2007: Finally, some recognition!:
Follow this link to the reference for Peter Benchley on Wikipedia.com; when you get there, scroll down to "Early Life" and "Jaws."

And follow this link to an August 2007 TV Guide Editor's "Ask FlickChick" Blog article which says I was the model for Quint in the movie Jaws; and scroll down to "The Facts of Jaws, Best Halloween Pix & More."

NEWSFLASH: May 06, 2008:My Summer 2008 Schedule
I was at Star Island Yacht Club in Montauk June 13 and 14th, selling personalized, autographed copies of my books Fifty Years a Hooker, White Shark Sam Meets the Monster Man and Monster Man, and my classic yellow t-shirts.

Then I was at the Atlantis Marine World Aquarium in Riverhead from June 15 through August 17, selling personalized, autographed copies of Fifty Years a Hooker, White Shark Sam Meets the Monster Man and Monster Man at the aquarium. My classic yellow t-shirts were available.


And if more "Montauk Monsters" are sighted in Long Island waters during my charter season, I hope to tag and release a live specimen--maybe the monster's momma . . . :)


I'm making my own straight gaffs, which will be made to order, and they will be available from early September 2008. They will be $125.00 each, plus shipping. These custom made gaffs will have the words "Made by Frank Mundus" branded on the handles because they are made personally by me, one at a time. They have ash wood handles and two hand-wrapped grips, and come in two hook sizes: a two-and-a-half inch or three-inch tempered steel hook. I will be making and selling these custom made gaffs after I return from Montauk in September.

I have made and used this type of gaff for years, catching all kinds of big fish with it and have never broken or straightened out the hook on any of these gaffs. Just to give you an idea of what they look like, here's some pictures of me with a couple of gaffs. 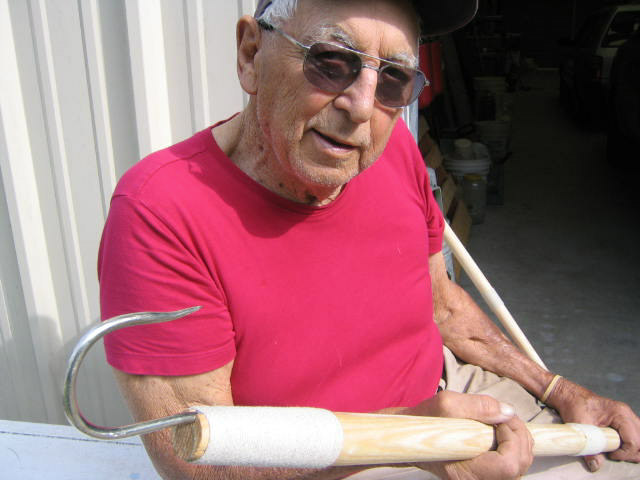 NEWSFLASH: Spring 2007:
Read the August 2007 issue of Maxim Magazine
Reporter Andrew Couts interviews me in an article about the Cricket II's historic last season. This issue of Maxim hit the stands in mid-July 2007.

TV programs that ran feature stories about me. After Donnie Braddick and I caught the 3,427 lb white shark in 1986, the story went worldwide. Now that I'm retired, I only go fishing when one of my special customers or friends visit. I occasionally give lectures to fishing clubs and special groups on request. You can read an online article on me written by reporter Tony Burch. And if you want to learn the best way to tag a shark without killing it, read my online article, "Tag, You're It!"

If you want to know more about me, read the Frank Mundus FAQs, where you'll discover, for instance: who is Arnold Boar?

NEWSFLASH: My hooded pullover sweatshirts are in! There's a limited supply, so get yours now.

NEWSFLASH: Check out my latest eBay auctions for:

NEWSFLASH: The Discovery Channel program about me is called The Last Shark Hunter and it aired again on July 31, at 8:00 PM ET/PT and on August 1st, at 12:00AM ET/PT. Here's a link to Discovery's description about the show and any future airdates:

"ASK FRANK" AUDIO January 2006: This weeks' topic: T-shirts, books and summer 2006 charters. To hear this audio, click on the play button at the end of this line of text If you want to buy my personalized, autographed books this summer, you will need to visit me at Star Island Yacht Club in Montauk: (631)668-5052, where I am making personal appearances June 15 through August, signing and selling books and t-shirts. I also have some charter dates still open for July and August shark fishing day trips.

NEWSFLASH: January 21. Latest Gossip: A few people from the discussion group noreast.com are blowing off steam about me and getting their "facts" wrong because they don't know what they are talking about: By mentioning me, they're giving me more advertisement. Have fun!

Who Is This Man? 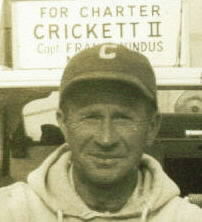 NEWSFLASH: January 24. I'm trying to locate the man in the photograph. He fished with me as a mate for a couple of trips in 1964. In fact, he was with us when we got the 4,500 lb. white shark on June 5 that year. All I know is that he was a jockey at the time.

Fifty Years a Hooker is now in print. It has been published by Xlibris and you can order it directly from their website

NEWSFLASH January 2006. Shark Attack Off Amity Point! (Australia). Click here to read more. The Jaws movie's fictional town of Amity has a real namesake near a small island off Australia, where there was a recent fatal shark attack. As far as I know, white sharks were not involved. From what I understand, it seems to have been done by a small group of bull sharks.

NEWSFLASH January 1, 2006: Large White Shark Filmed Near the Island of Oahu, Hawaii!
Click this link to read a newspaper report on the 17-foot white shark that was spotted off Hawaii last Wednesday. A diver free swam with it! Maybe it was "White Shark Sam" (see my kiddy's book below).

NEWSFLASH October 30th: My yellow, classic design crew neck shirts are in. Visit my t-shirt page to buy one. Click on this link T-Shirts

Learn more about my recent visit to Montauk by listening to my exclusive interview with Star Island Marina. Star Island is a Full Service Marina and can take care of all your boating needs. Star Island are also dealers for new and used boats, including Cabo, Sabreline and Albemarle. Listen to my "Ask Frank" interview with Bill Rush, store manager at Star Island Marina (my home base for June and part of July). To hear this audio (from 3/20), click on the play button at the end of this line of text

NEW: Email me your questions and you can hear me answer them here on my site each week.

magazine article (March '05) about me and Capt. Joe DiBella fishing Montauk this summer. Then click here for page 2 of that article.

NEWSFLASH March 2005: My autobiography Fifty Years a Hooker is out now. Read what people are saying about it:

"Laughed so much I fell off my polo pony and cracked a patella."
--Sir Wilson Spaulding, England

"I admire a man who ignores the clicks."
--Nguni Ngozi, Xhosa tribe, Africa

Listen to my interview with MEG author Steve Alten.
Click here to check out the "Ask Frank" audio archives

Read about the Pelican disaster of 1951.

Want to see pictures and hear me talk about a harpoon dart like the one that the fisherman Quint used in "Jaws?" Click here

Just got back from Cape Town, South Africa, where we did a program for Discovery Channel's 2005 Shark Week on the "Air Jaws" white sharks.

We trolled with a rubber seal (see photo above) and also anchored up and chummed for the white shark, using fish bait on a rope as a teaser. We had plenty of action and you will see some spectacular jump shot photos by shark researcher and conservationist Chris Fallows (www.apexpredators.com) and the Discovery crew when the show airs in August 2005. We also witnessed quite a few natural predations on seals by the white sharks and had our share of up-close action on the seal decoy. Then in Gansbaai, dive master and skipper Andre Hartman (www.dive.co.za) showed me how he "snout touched" the white sharks, lifting them up by the nose. The program will also cover some of my history as a shark fisherman.

For more info, email me at fmundus@fmundus.com